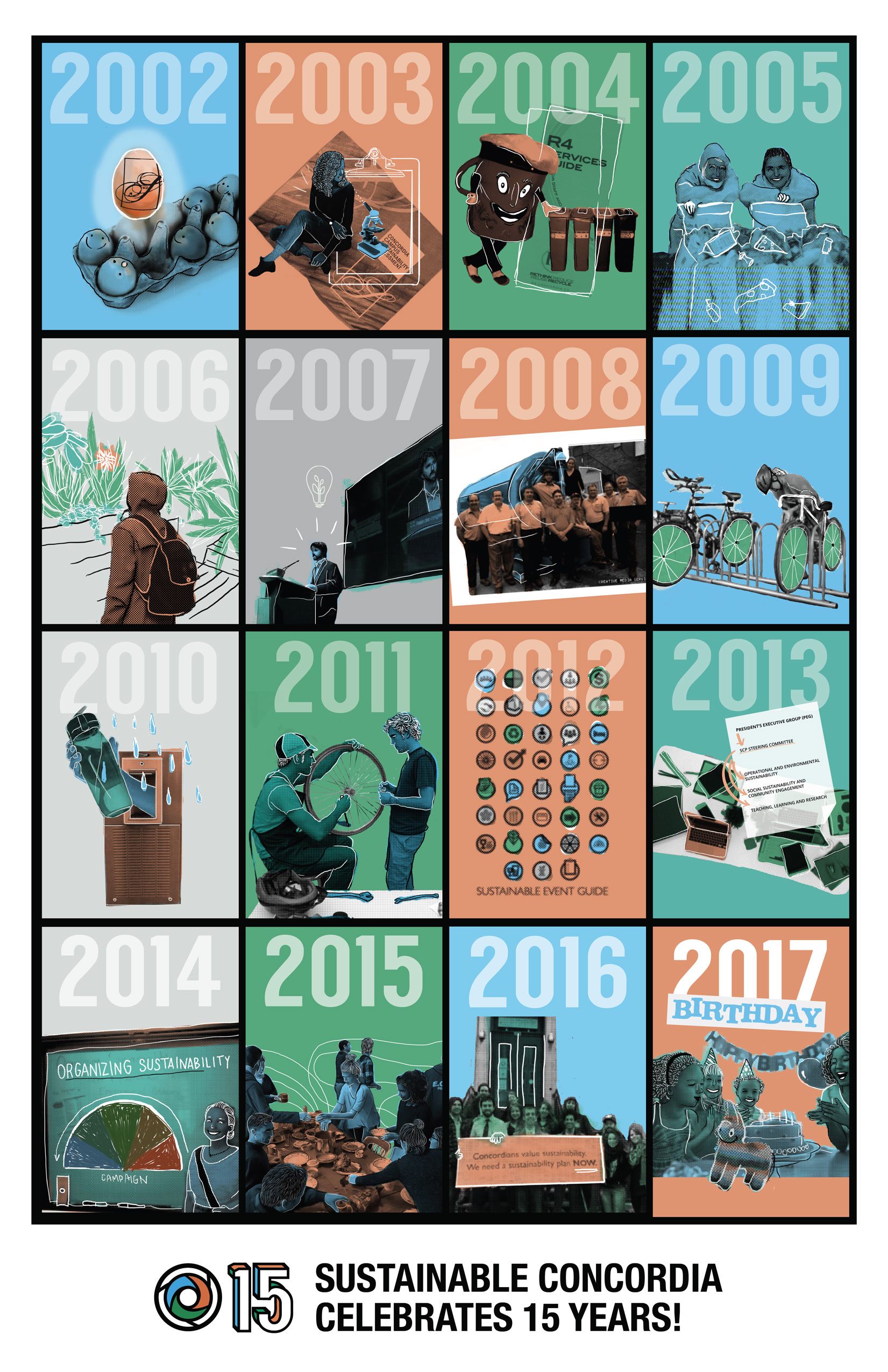 A brief history of Sustainable Concordia

In July 2002, two students hatched a plan to make sustainability a top priority at Concordia University. Armed with the motto ‘think globally, act locally,’ Geneva Guerin and Melissa Garcia Lamarca set out to conduct a Campus Sustainability Assessment that would paint a picture of where Concordia stood in terms of sustainability, compared to where it could be. They gathered together key stakeholders from Concordia’s staff, faculty and administration, fundraised $25,000, and created the Sustainable Concordia Project (SCP).

The project began with two fundamental, guiding principles. First, that a holistic approach to sustainable development be applied by balancing social, economic, and ecological goals. Second, that, for widespread organizational change to occur, diverse campus stakeholders had to be brought together to develop a vision for the future and champion it throughout their sectors and departments. These stakeholders formed the project’s Advisory Committee.

Meanwhile, at Royal Roads University on the other side of Canada, graduate student Lindsay Cole was finishing her thesis on assessing campus sustainability (available here). Through the SCP, Concordia became the pilot for her framework, which later became the Sierra Youth Coalition‘s Campus Sustainability Assessment Framework (CSAF). As of Summer 2007, the CSAF has been used at over 25 campuses.

Drawing on their connections from the Advisory Committee, the organizers arranged with professors to allow students to conduct research for the assessment as credited coursework. For example, an Urban Transportation class in the Department of Geography, Planning and Environment conducted a survey to determine students’ commuter habits when traveling to and from the Concordia campus. The organizers also did an extensive call-out for student research volunteers. Over 100 students from diverse faculties submitted work, looking at ways to encourage smarter transportation habits, build social capital, conserve water, and reduce the University’s ecological footprint, among others.

While work on the assessment continued, a process committee formed, focusing on strategies to ensure the project would live beyond the completion and publication of the assessment. A Design Art student, Miette L. Johnson, designed the assessment document, and a Communications student developed a website for Sustainable Concordia.

In January 2004, the 2003 Concordia Campus Sustainability Assessment (CCSA) was launched at a celebratory gala held in the J.W. MacDonald Library atrium. Its astounding success in engaging campus members along with its first-rate quality gave the SCP recognition at Concordia, and at universities across North America. A researcher from the Campus Sustainability Assessment Project reviewed 1,400 assessments conducted in North America, and ranked the CCSA at #2 for its comprehensive subject matter and multistakeholder engagement process.

Recommendations from the assessment led to the creation of many innovative projects.

At the beginning of the 2014-2015 school year it was recognized that the way the organization functions and the newly established priorities and topics did not fully align with each other. In this sense, it was acknowledged that the working groups, which have been under the SC umbrella for quite some time, did not align completely with the three priorities that had been developed through a very comprehensive, inclusive, and representative consultation process. This lead to role confusion within the organization as coordinators, the Board of Directors, volunteers, and interns worked in silos.  Therefore, in November of 2014, a committee was struck with the intention of discussing the issues at hand and building a plan to move forward. The committee started by adopting the following problem statement:

Sustainable Concordia has recently completed a visioning process resulting in a new vision, mission, and definition of sustainability that all our engaged members feel very good about. However, the visioning process ended, without a re-orientation of our human or monetary assets, nor a discussion of our organizational structure. We now have staff and director work plans that do not match our organizational priorities. There is however great buy-in and courage for engaging in a process of deep change, mirroring our desire for fundamental changes in our society and in its relationship with ecology.

Following the creation of the problem statement, more discussions ensued regarding the steps needed to move forward. It was quickly realized that this type of process was much more than the organization felt comfortable handling on its own. It was decided to engage an external, third party to help guide the process which lead to the connection with a Masters student in the Human Systems Intervention program, Margie Picillo. This addition to the process proved to be invaluable as she expertly facilitated a series of workshops inspired by Open Systems theory and Search Conference Methodology. These workshops helped to raise individual and organizational awareness about the environment and system Sustainable Concordia functions in, historical aspects that have influenced the development of the organization, as well as pieces from the community that continue to inspire operations.

As a result of this workshop series, the organization has made crucial decisions that will continue to be developed throughout 2015-2016 and throughout years to come. The organization will now focus on campaign-based programming which will align with the Priorities. Over the course of the next year, current working groups will create and execute transition plans to ensure they are autonomous and can sustain themselves operationally. This will also be done in partnership with other organizations on campus and we are excited to participate in the strengthening of these projects so they can truly flourish on their own.