Looking at the coalition’s campaign and future plans

Have you heard of divestment? If not, don’t worry, you’re not alone!  We, along with the CSU (Concordia Student Union) and Divest Concordia, are trying to change that!
The Divest Coalition is a student-led movement that started in 2012 and demands the Concordia University Foundation to take its 11 million-dollar investment out of the fossil fuel industry. Emily Carson-Apstein, the external coordinator at Sustainable Concordia is responsible for gathering and educating folks on the divest matter – and updating us on what is new in the divest movement at Concordia. Let’s see what has been going on!

“Wait a second, what is divestment?”

‘’Divestment is the opposite of an investment – it simply means getting rid of stocks, bonds, or investment funds that are unethical or morally ambiguous’’ as it was defined on the Fossil Free movement website. Locally, Divest Concordia advocates for change in our university. The group “calls on Concordia University to remove its investments in fossil fuels, and adopt a responsible investment policy.”

Why does it matter?

Divestment has been a hot topic for the past few years, all around the world. Now, over 58,000 institutions have committed to divest, which is about 5.57 trillion dollars taken out of the fossil fuel industry.

The question is more important than ever, and more urgent than it has ever been: 2017 has been an impressive year regarding violent natural disasters and weather abnormalities, which are often argued to be influenced by human activity. And although we cannot argue that climate change generates crazy storms, we can definitely say that the fossil fuel industry has been one of the forces poluting our planet for decades.

“I am a student, what does this have to do with me?”

Discussions about divestment are happening in universities and communities in Canada and around the world. Millions of students want a fossil free future, and their tuition to serve their community: Emily explained that even though it is mostly talked about through an environmental lens, ‘’divestment has a precedent for being a really effective tool for creating social change.’’ At Sustainable Concordia we also put the emphasis on fossil fuel investments being a community issue: even though pipelines seem far from us Montrealers, they impact local low-income and indigenous communities when oil gets transported and irreversibly damage ecological systems, by pushing people away to be built or by having unsteady structures, for instances.

As Emily put it: divestment tackles “the fossil fuel industry at its root is [and is then] an effective way to address both the global impact of climate change and local impact of resource extraction.”

What has happened so far at Concordia?

The grassroot, volunteer and student-led movement Divest Concordia started in 2012. Emily explained that “in 2013, because of student pressure, Concordia University created a 5 million-dollar Socially Responsible Investment fund from its 170 million endowment fund.” The fund has performed quite well, but (unsurprisingly) very little information has been released about it.

How public is the university about its investments?

Well, you guessed it: not much has been shared about Concordia’s plans to divest in a few years!
“All the figures we have about how much money [Concordia] has been investing in fossil fuels are from 2011, because that’s the last time the financial report has been open,” said Emily.

The university used 5 million dollars for a more sustainable goal – a great first step that can also be seen as a way to appease the student body instead of making meaningful change.

In 2015, JSIAC (the Joint Sustainable Investment Advisory Committee) was created to discuss plans regarding divestment, and their first meeting happened in February 2016. The Divest Coalition was invited to be part of the discussions along with the CSU and GSA, sitting across the table from 2 faculty members and 5 representatives of the Concordia University Foundation – students being involved in the process also sounded like a great step. Unfortunately, “JSIAC hasn’t met very often since then” Emily mentioned: the committee is quite static, difficult to get a hold of, and lacks transparency.

On the other hand, the CSU put Divest at the forefront of students’ concerns by making the movement its 2016 annual campaign, thus allocating lots of resources and people-power to the cause.

Now what? How do we change the world?!

The main challenge faced by the coalition has been the turnover: a lot of people get involved, and graduate after a few months or years. However, a lot of interest is still there, as we noticed when tabling during orientation. Emily even added that “the upside is that everyone is really passionate. I would even say there is a lot of passionate, invested people.”
So, the goal this year is to keep raising awareness among students through workshops, and to engage professors, in order to show the university the broader support in favor of divestment.
Simultaneously, as an educational organization, Sustainable Concordia will work to draw the connections between our community and fossil fuel industry’s actions, exposing the issue outside of its financial and institutional framework.
Let’s make concordia more sustainable together, let’s divest! 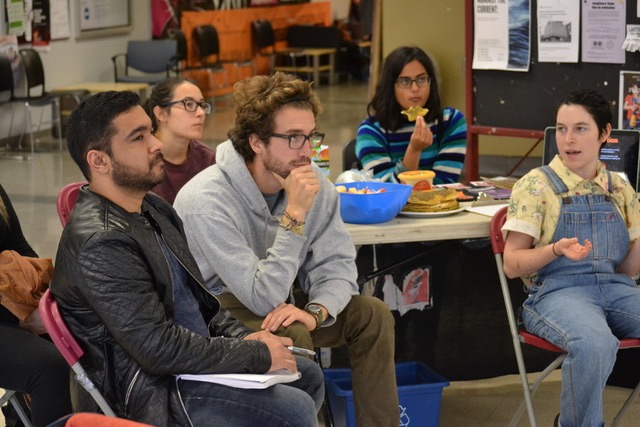 Interested in knowing more and making change? You can already start helping in this campaign by talking about it around you and getting more information on the Divest Concordia website. Stay tuned for our upcoming workshops to become an expert on divestment!